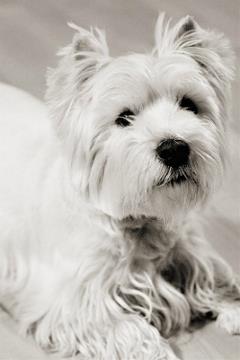 Atopic dermatitis, also referred to as canine atopy, is one of the most common allergic skin diseases, second only to flea allergy dermatitis. Estimated to affect nearly 10 percent of dogs, canine atopy typically begins when the animal is between one to three years of age.

Atopic dermatitis is a disease believed to be caused by an inherited tendency for an allergic reaction when exposed to allergens that are either absorbed through the skin or inhaled. Any dog can be affected, but certain breeds are more susceptible, including:

In the early stages, dogs suffering from canine atopy will present with symptoms such as:

It should be noted that often times the disease does not move beyond this period.

In later stages of the disease, the animal will be miserable. Symptoms associated with the disease as it progresses may include:

Some dogs diagnosed with canine atopy will accompany the symptoms by also presenting with ear canal infections, otitis externa. Also interesting, some dogs will only present with otitis externa. These dogs often exhibit the following symptoms:

The clinical signs of canine atopy are very similar to a number of other conditions, including health problems that could indicate something more serious. When examining the animal it can be difficult to distinguish canine atopy from the following skin diseases:

Diagnosis of atopy needs to include:

Because atopic dogs are typically allergic to many allergens it can be difficult to avoid exposure to all. There is no cure.  However, certain products and procedures can provide relief from the signs and discomfort:

Talking to Clients about Canine Atopy

When talking to clients they should be reminded that aside from the recommendations above, there are other steps they can take that will help to diminish the symptoms and reduce discomfort. Advise clients that the following actions will help to remove allergens from their animal’s living environment:

There is no way to completely avoid all allergens, but knowing ways to eliminate some of them may make a difference to one of your patients.