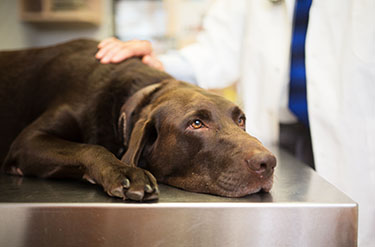 Too much or too little cortisol can be life threatening. Cushing’s disease, or Cushing’s syndrome, is a condition in which one of those two systems essentially malfunctions and produces too much cortisol.

Cushing’s Disease in Dogs
Cushing disease is more common in dogs than other species.There are two major types of CD that impact dogs. Pituitary dependent is the most common form and causes 80-90% of CD cases. This form occurs when a tumor, usually benign, forms on the pituitary gland. Adrenal dependent occurs when a tumor forms in one of the adrenal glands. This form makes up about 10-15% of CD cases in dogs. Cushing’s disease can also be caused by prolonged steroid use and is referred to as iatrogenic Cushing’s disease.

Typically, Cushing’s disease is found in dogs that are seven years or older and there are some breeds that are commonly affected.

Breeds that are prone to Cushing’s disease include:

Signs of Cushing’s Disease in Dogs
Regardless of the type of CD, the symptoms and signs are similar. Many times, owners note their first cause for concern is increased urination. Dogs may wake up in the middle of the night to go out or housebroken dogs may start having accidents in the house.

Unfortunately, because these symptoms progress over a long period of time and are often mistaken for common signs of aging, many cases are misdiagnosed, or dogs have an advanced form of CD before the disease is found.

Similar to the ACTH test, a LDDS test requires a preliminary blood test before the dog receives an injection of the steroid dexamethasone. After a few hours, a second blood sample is tested. If the dog’s cortisol goes down, the dog has a normal response. If their cortisol levels don’t drop, it’s likely that there is a tumor preventing their glands from responding properly to the medication.

A veterinary professional may also use an ultrasound to determine if there is a tumor present and, if so, where it is located.

Cushing’s Disease Treatment in Dogs
Though the symptoms and diagnosis of CD are similar, the treatment will vary based on the type of CD.

Pituitary Dependent: Though pituitary tumors are removed from people fairly regularly, surgical removal in dogs is not common practice. More often than not, pituitary dependent CD is treated with medications that destroy part of the adrenal cortex, so cortisol levels remain normal.

Adrenal Dependent: Thankfully, this form of CD is less common, as it requires more complicated treatment. Typically, this type of CD is treated with surgery to remove the tumor on the adrenal glands. Benign tumors may be cured by surgery, though the process itself is complicated.

Latrogenic Cushing’s disease: This form is easily treated by tapering the offending steroid medication until it is no longer administered. However, the original condition that the steroids were treating is likely to come back.

No matter the type of CD, the most important thing you can do is discuss options with your veterinarian and follow your dog’s treatment plan.

Cushing’s Disease in Cats
Cushing’s disease is significantly less common in cats than in dogs, but it does occur. Typically, middle-aged to older cats are affected and female cats are slightly more prone to it, though there is no breed predilection for the disease.

Similar to CD in dogs, Cushing’s disease in cats is caused by an anomaly on either the pituitary or adrenal glands, resulting in an increase in cortisol production. Unlike in dogs, CD in cats is almost always in conjunction with feline diabetes.

Signs of Cushing’s Disease in Cats
Symptoms of CD in cats include increased appetite and thirst, which can cause excessive urination. Other symptoms include:

Because these signs can take a long time to manifest and are frequently seen in cats being treated for diabetes, it can be difficult to diagnose Cushing’s disease.

Your veterinarian may start with routine blood and urine tests to rule out other common causes of some of the symptoms of Cushing’s disease before moving on to more specific tests like ACHT or LDDS tests.

X-rays or ultrasounds can also be helpful to determine what type of CD your cat has and how severe the condition is.

No one test is the end-all-be-all for diagnosing Cushing’s disease, so more than one test may be administered, and some may be done multiple times before treatment is started.

Cushing’s Disease Treatment in Cats
Treating Cushing’s disease in cats is difficult.Typically, medication to help get the condition under control will be the first step. This will help improve your cat’s quality of life and stop the deteriorating effect of the disease.

If the form of CD is pituitary dependent, radiation therapy is an option for treatment and has few side effects. Medication may still be necessary following radiation.

Surgery is also an option for both adrenal and pituitary dependent CD, though it can be difficult due to the small size of a cat’s glands. Removing the affected adrenal gland is a more common practice and can be very effective if only one adrenal gland is impacted by the tumor. Surgical removal of the pituitary gland, however, is extremely difficult and not typically recommended.

For cats with iatrogenic Cushing’s disease, tapering the dosage until its completely withdrawn is typically the only treatment needed. However, a replacement medication may be necessary to treat the reason for the steroid in the first place.

Your veterinarian will be able to provide the best options for diagnosing and treating your cat.

Controlling Cushing’s Disease
Between both cats and dogs, Cushing’s disease is a serious condition that can be hard to diagnose. Because of this, keeping an eye on your pet, especially as they get older, for signs of anything out of the ordinary is imperative for their health. Be sure to schedule regular vet visits and always ask your veterinary care provider if you notice anything unusual with your pet.

Covetrus North American is dedicated to the health of animals. Visit us online or contact your Covetrus representative at 855.724.3461.