Canine Flu is being reported across the country view the map below to see the states with confirmed cases of the canine flu or visit Merck Animal Health's outbreak page for more information. 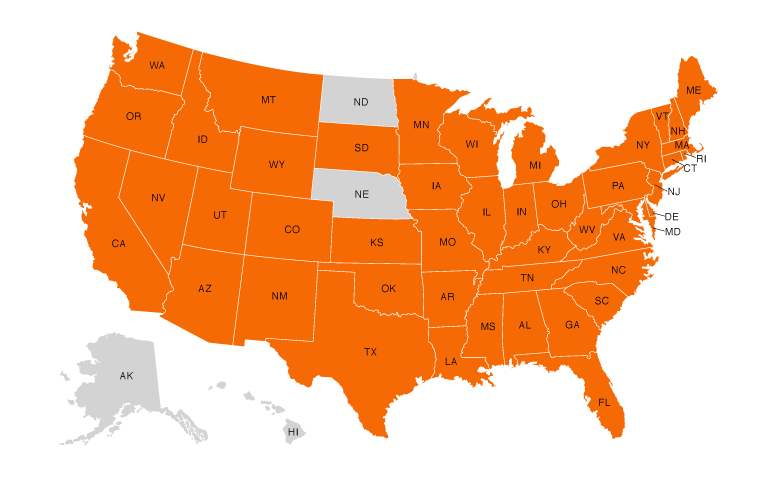 This highly contagious disease began as an isolated episode of respiratory disease in one state, and has now become a nationwide health concern for all dogs.

Canine Influenza is caused by one or more influenza A viruses. Two distinct canine influenza viruses, H3N8 and H3N2, have actively circulated in dog populations in the last several years although H3N8 has infected dogs for over 10 years (1) and H3N2 may have infected dogs in Asia prior to the year 2000 (2, 3). H and N refer to the hemagglutinin and neuraminidase proteins respectively, which are protrusions on the surface of the virus that allow the virus to attach to a host, and allow a laboratory to initially identify and categorize the virus. Despite its name, canine influenza has also been shown to infect other species, including cats (4, 5), ferrets (experimentally) (4, 6), and guinea pigs (7), so it is important to note if any other animals are also acting sick. Cats have also recently been infected with an H7N2 avian influenza, or bird flu, strain (along with the attending veterinarian!) (8) so it is important to note that although this is not classified as a canine influenza virus, many different influenza A strains can potentially infect companion animals.

Influenza viruses are most likely to infect large groups of animals during the winter months when environmental conditions (low temperatures and elevated moisture) allow the virus to live longer outside the host animal (9), and animals are in closer proximity to one another. However, the recent H3N2 outbreak in the United States began in the late winter months (10) and continued well into the summer, so flu may be an issue any time of year. In companion animal species, canine influenza typically circulates in shelters and boarding facilities after the introduction of an infected animal, due to the number of unexposed dogs in the population, as well as the constant introduction of new, susceptible animals into the population (11).

Outbreaks of the dog influenza virus increased last summer, and now there are reports of the canine illness from Canada to California, according to a report in Newsweek.

This year, the flu has certainly taken its toll. The virus has rapidly spread across the country and grown to epidemic levels, killing several young and healthy people along the way. And now there's even more bad news about this year's flu season: It's affecting pets, too.

The Canine Flu is highly contagious, give your team the information they need to stop the spread of the disease with this Dog Flu Facts webinar.

Thank you Nobivac for helping us curate the information on this pages.

Contact your Covetrus Representative or call 855.724.3461 to learn more about the best vaccine solutions for your practice.